We are huge College Sports fans and especially University of Tennessee. The Lady Vols won the National Basketball Championship last night. Pat Summit, their coach, is the perfect role model and mentor in communications, motivation and leadership. The game was supposed to be very close. They won handily over Stanford. 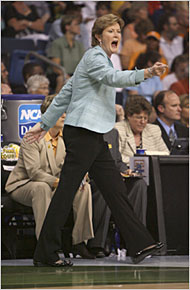 My step daughter, Karen, sent me this email and I believe there is a lesson here for us all… Don’t let your mouth over load your goals.

“‘I don’t know if you watched any of the pre-game stuff, but they talked about how SMART the Stanford women had to be just to get in (in my opinion implying that the TN gals were a bunch of morons)…one of their players said “Sure, Candace can dunk, but I’d like to challenge her to a “math-athon”. Well, they better stick to math because TN outran them, out rebounded them and flat out made them look like a bunch “math-chicks” trying to play basketball…

Thirty-four seasons ago, after Pat Summitt had coached her first game at Tennessee, she phoned home. “Did you win?” her father, Richard Head, asked. “No sir, we got beat.” “By how much?” “One point.”

There was a long pause, and as Summitt feared that her father would blame her, he said: “Let me just tell you one thing, Trisha. Don’t take donkeys to the Kentucky Derby.” Pat’s father talking to her after her first lost of her coaching career. Apparently it paid off in her managing and leading young women to success!

They continue in the article “The message was a valuable one: The best coaches had the best players. Tennessee (36-2) clearly did Tuesday night in winning its second consecutive national championship and eighth over all with a 64-48 victory over Stanford.”

The lesson here for all of us? Communicate well, lead the way you want to be, and let focus and discipline be your middle names! Marsha

Receive Marsha’s blogs in your inbox